The Fearless Cooking Club’s Oktoberfest adventure Part II was the making of the sausages.

I have to admit that I was pretty scared at stuffing meat so I had to do my research.

First I read two blogs from The Paupered Chef website on making Wisconsin bratwurst  and how to stuff sausages. The pictures were great for step by step directions.

I found that there are three steps to making sausage: the casings, meat preparation and seasoning, and stuffing the sausages.

Now out there in the world are hog casings and synthetic casings.  A friend’s spouse, who has butchered wild game in his basement, told me that he only liked the collagen casings. He said he always had trouble with the hog casings breaking. Then I talked to two butchers who stuff and sell sausages and only use hog casings.  Hog casings are stored in a salted water solution. When you are ready to use them you must soak them in water. Pliability of the casings is the key.

Hog casing are cheap and any butcher will sell them to you by the foot. Casings come in different forms but all are not edible so do your research if hog casings make your skin crawl.  I started with three feet of hog casings soaked in water for 30 minutes. Then I knotted the end and put about a teaspoon of water in the end before slipping it onto the sausage stuffer. Again, it’s all about pliability.

Joy had an attachment for a meat grinder and sausage stuffer for her KitchenAid mixer. Lucky for her she got all the attachments at a yard sale for about $5 or $10. Otherwise you could buy them online at the KitchenAid website.

Next the casings have to be slipped onto the sausage stuffer (pictured below). It’s  like rolling up hosiery before putting them over your feet. 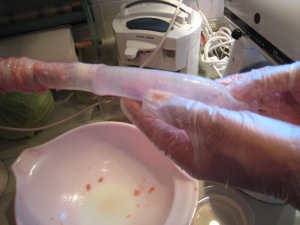 The picture above was the second batch of sausage stuffing. As you can see it was air tight and it blew out air instead of sausages. A little phallic eh?

The actual making of the sausage was the easy part.

4 TBSP seasoning  (1TBS per one pound of ground pork)

I had the butcher de-bone the pork shoulder at the market. I’m sure if I didn’t have a meat grinder at home, he would’ve ground it for me at the market as well.

Now comes the fun! We figured out the casings, the pork is ground and seasoned and now it’s time to stuff!

Key points on stuffing the sausages:

2. Figure out the length of your sausages, then twist. When you get to the next sausage length then twist the opposite way. The second batch was funny because the lengths were all different.

3. Do this with a least two people, one to run the machine and one to twist the sausages. 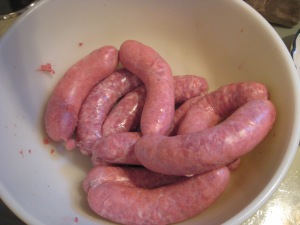 The Fearless Cooking Club is getting together at the end of October to eat our bratwurst with our homemade sauerkraut (please see the 9/18/2011 blog post). My sauerkraut is currently five weeks into the fermentation process. I am hoping to can it this weekend.