‘I want to learn to cook!’ my chip off the block chirped. Okay, Kate is 22 years old, she’s cooked before. During her college days she ate dorm food, made a few recipes I handed down to her, and tested the Pinterest web recipes.

She wants to feed herself in Veterinary Medicine School for the next four years. Her challenge for the this summer is to improve on cooking techniques,learn basic recipes and try to stay within a budget. My challenge is to give direction on what I’ve learned from trial and error in the kitchen.

See how enthusiastic she is?

Here are all the recipes we’ve made individually and together. 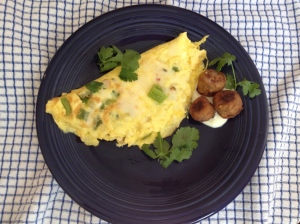 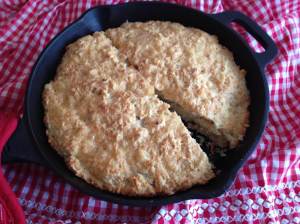 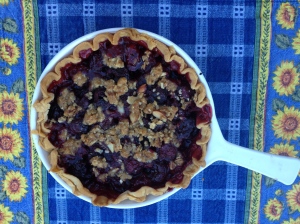 1. Pitting the cherries for the cherry pie crisp was fun. About 10% of the cherries still had the pits inside despite using the cherry pitter.  We found two websites on how to pit cherries without  using a pitter at Our Best Bites and Baking Bites.  The cherries splattered juice everywhere while pitting them. We had just watched Django Unchained the night before and scenes from the movie came back to haunt us!

2. The Skillet Beer Batter Cheese Bread called for Gruyère cheese which was pretty tasty, but a little pricey for someone on a budget. For a similar and cheaper substitute use Swiss Cheese.

3. Her favorite recipe was the Nutella Banana Swirl Bread. Her mistake was that she set the oven for 250 degrees, not 350 degrees. The recipe in turn took longer to complete after she discovered  that the bread was still mushy inside and then adjusted the oven temp. As a taste tester, I thought the bread was delicious and moist. I didn’t know about the temperature error until much later. Gotta check the oven!  There are chocolate hazelnut butter knock-off brands that are cheaper.  They all vary in quality, so test out what brand you like.

4. Kate said she had never eaten a Falafel before and liked them. She also said she is not a fan of radishes, but we had them growing in the garden and we had to make something! She said the radishes were good as long as they were “hidden”.

5. Pizza is always a favorite and economical to make. We made a garlic butter sauce for the base of the crust. It was yummy with mozzarella cheese, basil leaves, halved yellow cherry tomatoes, red onion and grilled chicken thigh strips.

I bought her the America’s Test Kitchen ‘Quick Family Cookbook’ to take with her this fall. She loved leafing through the recipe book. The pictures are great with many step-by-step tips and techniques to master.

My parting wisdom: you can buy the ingredients to make your favorite recipes or you can look up recipes and decide what to make based on the ingredients you already have in your pantry. The key is use your ingredients thoughtfully. Way to go Fearless cook junior!