The produce from our garden has been busting out all over.

I love Swiss Chard and it grows so easily in our garden. Within a week after trimming out 1/3 of this bed, it grew right back.

I had to search for recipes that would be a challenge for me other than sautéing chard in olive oil and shallots.

I furrowed out a Bon Appétit  magazine from May 1999 profiling Provence, France. It was a Special Collector’s Edition. The main article profiled 20 essential ingredients of the region: fresh produce, herbs, dairy, meats, seafood and breads. 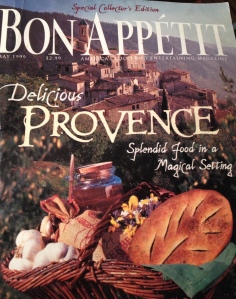 In France, Swiss Chard is called blette. It has white or red stem varieties. The leaves need to be trimmed away from the stems before using in a recipe.

Steam or boil potatoes, about 50 minutes until tender. Cool potatoes, slightly then peel . Mash potatoes in large bowel until smooth, add the salt and pepper.

Steam or boil the Swiss chard until wilted, about 3 minutes. Once it has wilted, drain, until cool and then squeeze out as much water from the chard as you can. Finely, chop the chard by hand or with the food processor.

Mix the chard in the mashed potato mixture add egg and oil. Gradually add the flour until combined, forming a slightly sticky dough.

Dust a board with flour, I used pastry fabric. Working in batches and with floured hands, roll 1/4 cup of dough and form a 12 inch long rope. Cut the rope into one inch pieces.

Roll each piece between palms forming a ball. Using a whisk, roll each ball down the length of the wires to make a ribbed impression.

Transfer gnocchi to a baking sheet with parchment paper to rest. 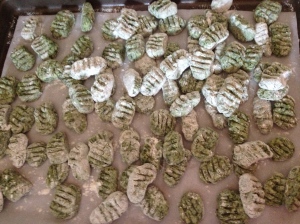 Place the gnocchi, in batches of 10-12 in a large pot of boiling salt water cooking for 6 minutes, until the gnocchi rises to the surface of the boiling water and are tender.

Using a slotted spoon transfer the gnocchi to a large bowl.

Melt butter in large heavy skillet over med-high heat. Add the gnocchi and sauté until coated with butter and cooked through for about 3 minutes.

Serve the gnocchi atop hot marinara red sauce or white sauce and sprinkle with parmesan cheese. 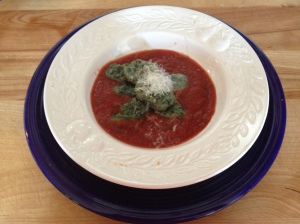 1. The gnocchi can be frozen up to 1-2 months in the freezer after boiled. When ready to serve, thaw, then cook with butter in a sauce pan before serving.

2. I used all-purpose vinyl gloves to mix and roll the dough. It was way to sticky not to!

3.  I enjoyed the white sauce better than the red sauce with the gnocchi.  The white sauce gave it a richer taste. If using a red sauce, it would be best to pick a light one, nothing heavy. Of course the shaved parmesan atop made the flavors pop.

4. Okay, I have to say it. The green-ness of the gnocchi was visually off-putting. It reminded me and my daughter of insect larvae.

5. When produce comes out of the garden I have to wash it two to three times. Dirt and bugs hang onto the leaves pretty easily.

Sorry if talking about bugs grossed you out.