I was given this book several years ago by a dear friend, Esther’s Gift. This holiday book is part of the Mitford book series by Jan Karon, set in England. This short story is about Esther who makes Orange Marmalade Cake for her friends as gifts for Christmas. Our music group, is having a party today to celebrate the Epiphany, when the Three Wise Men brought gifts to the baby Jesus. My gift to my friends is to make this awesome cake and celebrate the end of the Christmas season. 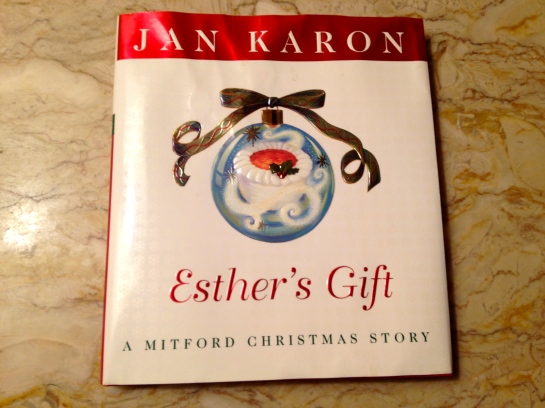 For the Orange Syrup:

1. Preheat oven to 325 degrees. Butter two 9-inch round cake pans, line with parchment paper and butter and flour the paper, shaking out the excess.

3. In another bowl, beat the butter with an electric mixer until smooth, Add the sugar, a little at a time, beat until light and fluffy. Beat in the eggs, orange zest, and vanilla. Beat the dry ingredients alternately with the buttermilk until well combined.

4. Evenly divide the batter between the pans, smooth, rap each pan on the counter to expel any air pockets or bubbles then place in the oven. Bake for 45 minutes, or use a cake tester inserted into the center comes out clean. Transfer to racks and cool in the pans for 20 minutes.

5. In a bowl, stir together the orange juice and sugar until sugar is dissolved

6. With a toothpick poke holes 1/2 inch intervals in the cake layers. Spoon the syrup over each layer, allowing th syrup to be completely absorbed. Let the layers cool completely.

7. In a small saucepan, set over moderate heat the marmalade until just melted. Let cool 5 minutes.

8. In a bowl, whisk the heavy cream with the sugar until foam firm peaks. Add the sour cream, a little at a time and whisk until mixture is spreading consistency.

9. Arrange, one of the layers on a cake plate and peel off the parchment paper. Spread the 2/3 of the marmalade over the top spreading it evenly. Invert the remaining the layer onto the top of the first layer, peel of the paper and spoon the remaining marmalade into the center of it, leavening a 1 and 1/2 inch border around the edge. Frost the sides and the top border with the frosting, leaving the marmalade on the top of the cake exposed. Chill at least 2 hours before serving. 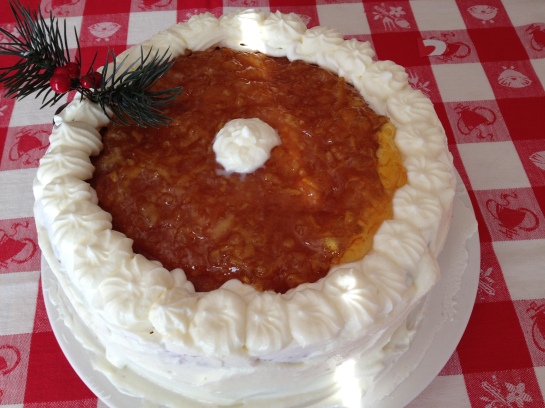 1. Putting the cake together was the most challenging part of the recipe. The whipped cream was fabulous, but I needed to be doubled. After I made the second batch, I realized that the whipped cream wasn’t as cold as it could be and it didn’t whip as stiffly.

2. The marmalade was applied after the whipped cream and worked out better.

3. What a fun cake to make and the batter was divine! I can hardly wait to taste the final product in a few hours. 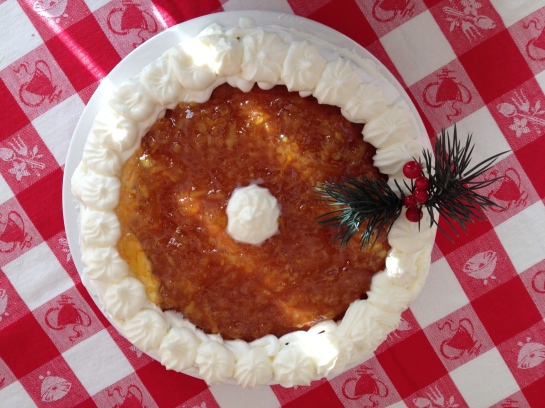